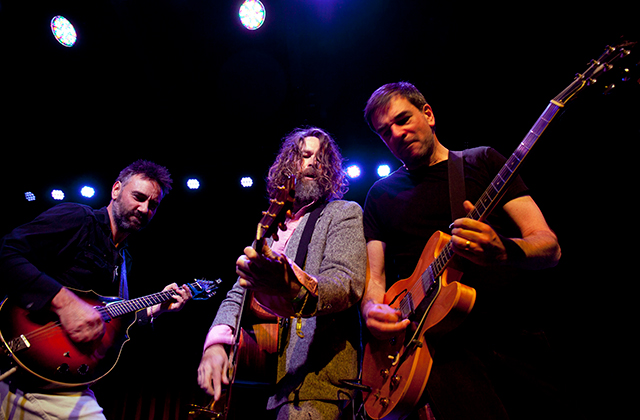 Hothouse Flowers are a rock n’roll band, Hothouse Flowers are a traditional band, Hothouse Flowers are a soul band, Hothouse Flowers are a jam band with their own organic jam spread on both sides of the bread!
Something amazing happens when Liam Ó Maonlaí and his bandmates step onto the stage – something that has been shaped by over thirty years of singing and playing all over the world, and spawning hits like Don't Go and I Can See Clearly Now yet no two shows have ever been the same.
There is a sense of musical adventure - an impulse to reach new heights and depths in music where the unspoken aim is that the band and the audience become one and the world becomes a different place for a while.
Hothouse Flowers were recently invited to be featured in the opening scene of Amazon Prime’s hugely successful The Grand Tour to perform their version of I Can See Clearly Now for an audience in the Mojave Desert. I Can See Clearly Now then went to Number 1 in the UK iTunes Rock Charts… a mere 26 years after its first release!
The bands recent UK tour saw them reveal new material from their brand new album Let’s Do This Thing which is out now and available for download on the band's website!
This year marks thirty years since Hothouse Flowers’ debut album, People, was released and became the most successful Irish debut album in ever. Liam, Fiachna and Peter joined Ray D’Arcy on on RTÉ Radio 1 for a chat and a few songs last year to mark the occasion.

Please Note: This will be an acoustic show

"Four decades later, they are still playing the best gig they have ever played"

"So many bands claim, or wish for, 'soul' and 'feel' but the Flowers just have it, naturally and effortlessly"