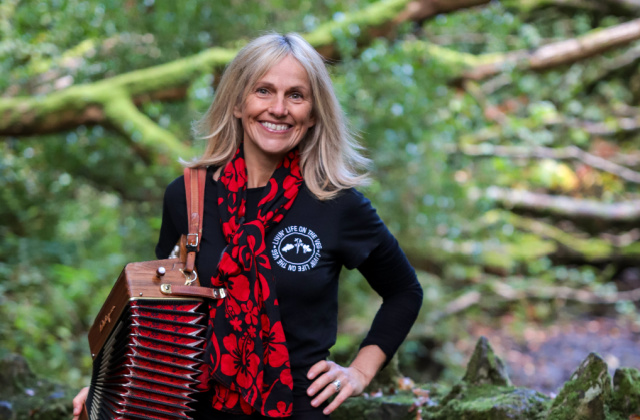 
Sharon Shannon has been a musical icon for over 20 years. Traditional Irish music is her background but she has been fearless in her musical exploration having defied genres and woven her unique style through country, French-Canadian reggae, hip-hop, dance and classical.
In June 1989 Sharon was rehearsing and demoing tracks for her first album, when she was whisked away to Glastonbury festival with The Waterboys.
In the 30 years that has elapsed since then, Sharon has recorded 10 studio albums; 5 live albums, 4 Best of compilations and 3 live Concert DVDs.
She has received many awards including being the youngest ever recipient of the Meteor Lifetime Achievement Awards in 2009
She has collaborated, recorded and toured with everyone from Willy Nelson,Bono,Johnny Depp, Shane Mc Gowan and John Prine to Nigel Kennedy and the RTE Concert Orchestra and had many hit records including The Galway Girl with Steve Earle, Its Christmastime Again with Wallis Bird and Go Tell the Devil with Imelda May.
Fáilte Ireland and TG4 have joined forces with Sharon on a new travel and music programme ‘Heartlands’ August September 2021
The four-week series, which commenced  Wednesday 11th August at 8.30pm, featured Sharon and her niece Caoilinn Ní Dhonnabháin showcasing the Shannon River region across Ireland’s Hidden Heartlands.
Sharon and her niece Caoilinn Ní Dhonnabháin cruised the River Shannon discovering Ireland’s hidden gems while catching up with a host of musical friends, such as Liam O’Maonlaoi (Hothouse Flowers), Steve Wickham (The Waterboys), Eleanor Shanley, Nathan Carter, The Henshaws, Seamus Begley, Mundy, Gerry ‘Banjo’ O’Connor and Susan O’Neill.
Book Now View all Music Events