A love-letter to life in rural Ireland.
“He was sitting closer than ever he had sat to a girl before.
And it was the girl he had dreamt of.
He was terribly unhappy."

Set in 1930s Cavan, Tarry Flynn tells the hilarious story of the farmer, poet and lover-from-afar, and his quest for big fields, young women and the meaning of life. Tarry’s adventures uncover the beauty in every aspect of nature and farm life, while he seeks to keep up his desperate campaign to woo the local girls. Or at least have a roll in the hay!

With a large-scale cast, this Nomad Theatre Network production of Patrick Kavanagh's seminal work, adapted for stage by Conall Morrison, is given dynamic new life under the direction of award-winning Aaron Monaghan and Livin’ Dred Theatre Company, and promises to be one of the theatrical events of the year.

Duration: 2 hours approx, with an interval

Latecomers may not be admitted to this performance 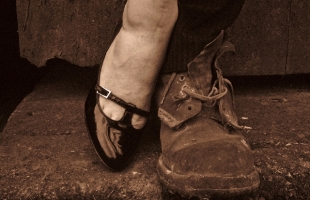