5 reasons to see Brothers of the Brush by Jimmy Murphy 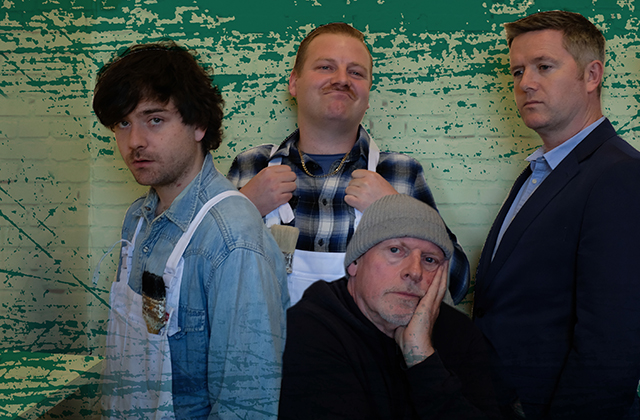 Brothers of the Brush was written by Jimmy Murphy

Jimmy Murphy is a Dublin-born playwright with a string of hits to his name, not least The Kings of the Kilburn High Road which was inspired by his time in 1980s London working on building sites. The play was later adapted into an IFTA-winning feature film.
Brothers of the Brush was written as direct response to what Murphy perceived as a lack of theatre that reflected the Ireland he saw around him. The bold, authentic script that would become Brothers of the Brush was commissioned by the Abbey Theatre in 1993 and became Murphy’s first produced work as a playwright.
He has since gone on to write nine more major plays, the latest being 2015’s The Kiss.

Brothers of the Brush captures a moment in Irish history

Jimmy Murphy saw first-hand a generation of Irish men forced to emigrate to the UK in search of work – usually construction work – and when the Celtic Tiger first made an appearance in the early 1990s he was moved to write a play set in the early days of a new Ireland.
With work suddenly available at home, two of the play’s characters return from London to discover that Dublin is building again – but survival isn’t going to be easy.
With 25 years’ worth of hindsight, including a catastrophic recession, Brothers of the Brush takes on a fascinating historical context.

Brothers of the Brush has an all-star Irish cast

Brothers of the Brush is produced by Verdant

Verdant, helmed by producer Donal Shiels, has brought hugely successful shows such as Private Peaceful, Shout! and, not surprisingly, The Kings of the Kilburn High Road also by Jimmy Murphy.

Other recent hits for the company include a stage adaptation of Irvine Welsh’s Trainspotting and The Weir by Conor McPherson.

Brothers of the Brush has been a critical and commercial success

The original production of the play garnered a Best New Irish Play award at Dublin Theatre Festival as well as a Steward Parker Trust Award. It received rave reviews on its first run and went on to play in London, Edinburgh and both US coasts. Murphy’s script has even been translated into German and Welsh.
This stunning revival has been described as “a cracker” (Irish Independent) with “explosive dialogue and acting” (Irish Mail on Sunday). It is “a deeply moving, hilariously funny, irresistibly powerful experience” (The Arts Review) which is “built to last” (Sunday Business Post).
___________________________________
Tickets are available with free booking online or, alternatively, by calling our Box Office on (01) 231 2929. You can also keep up with us on Facebook, Twitter and Instagram.