A dazzling start to summer this May at Pavilion Theatre! 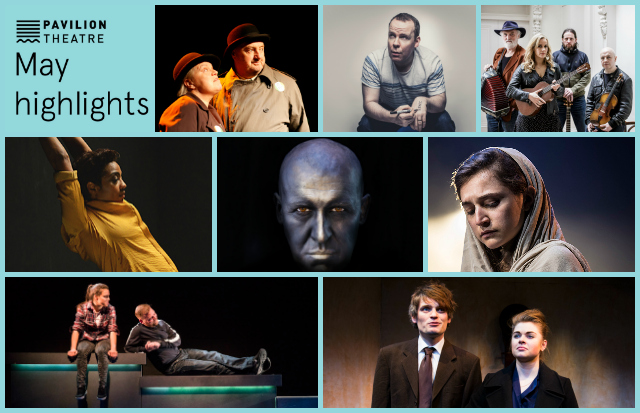 With a sizzling selection of events from the worlds of theatre, music, comedy, dance, cinema and more, Pavilion Theatre is the perfect place to spend those warm May evenings. Let’s take a look at our packed programme…
____________

From The New Theatre and BBC Stewart Parker award-winning playwright Gerard Humphreys, Norah (Thu 3 May) is a moving new drama with a deep understanding of its setting. Set in Troubles-era Belfast, the story follows Norah (Juliette Crosbie) whose life is turned upside down when her brother goes on hunger strike.
Seen by over five million people, Eva O’Connor’s poem “It Shouldn’t Have to Be this Hard” was a vital addition to the conversation surrounding the upcoming referendum. Her new play for Fishamble, Maz & Bricks (Tue 8 & Wed 9 May), is a thought-provoking and very funny new drama also starring Stephen Jones (From Eden) which folds these themes into a chance meeting between two strangers.
Michael Patrick had a rather unique and difficult problem as a teenager: with no father to turn to, he discovered a swelling the size of a grapefruit in his left testicle. Written by Michael himself along with Oisín Kearney, My Left Nut (Wed 16 May) was the breakout hit of Dublin Fringe Festival 2017 with hilarious writing and an important self-care message for young men.
No stranger to Pavilion Theatre, the incomparable, Olivier Award-winning Pat Kinevane returns to our stage with the third in his trilogy of plays for Fishamble, Underneath (Thu 17 May). Told from the perspective of a dead woman who was derided for her physical appearance in life, it has all the humour, heartbreak and home truths Pat has become renowned for.
The Successful TD by John B Keane (Fri 25 May) is back by popular demand, once again starring the irresistible double act of Jon Kenny and Mary McEvoy as political shyster Tull McAdoo and his long-suffering wife Betty. Laced with razor-sharp satire, Keane’s 1967 play is as relevant today as it ever was and audiences can expect a most unparliamentary evening’s entertainment.

Music Network is bringing together two of classical music’s most exciting young stars, Thibaut Garcia (guitar) and Isang Enders (cello) (Tue 1 May). The duo each have a list of accolades any veteran musician would be envious of, and together they create a truly transportive sound. The programme will include Bach, Bogdanović and new commission by Benjamin Dwyer.
Two-time Grammy winner Albert Lee (Wed 2 May) once again brings his virtuoso electric guitar playing and star quality to Dún Laoghaire, supported his trusty backing band. Known for his work with Eric Clapton, the Everly Brothers, Dolly Patron and many more, Albert rockabilliy-inspired Americana is a must-see for any classic rock lover.
A cross-channel collaboration between four musicians at the height of their powers, Music Network brings us Heidi Talbot (voice, ukulele), Breanndán Ó Beaglaoich (voice, accordion), John McCusker, (violin, whistles) and Paul Meehan (guitar) (Sat 19 May). Playing the energetic polkas and slides of West Kerry and waltzes, marches and reels from Scotland, it’s a rare opportunity to see the UK and Ireland’s finest folk/trad talent sharing a stage.
Bright, breezy and perfect for summer, Shout! (Thu 31 May) is a new musical featuring all the biggest hits of the swinging 60s. The show follows five young women in London all of whom subscribe to the same forward thinking mod magazine. With unforgettable songs like Son of a Preacher Man, I Only Wanna Be with You, Downtown and, of course, Shout! it’s bound to be a barnstorming trip down memory lane.

A permanent fixture on the panel and stand-up circuits, Neil Delamere (Fri 18 May) stops in Dún Laoghaire with his new show Butch Cassidy and the Sundance Pensioner. Autobiographical and characteristically hysterical, Neil kicks off this latest set of jokes with a story about his dad asking him to help deliver Meals on Wheels…

Strumming its way into millions of hearts and two Oscar wins (Best Animated Feature and Best Original Song) last year, we’re delighted to be showing Disney Pixar’s Coco (Sat 19 May) on our big screen. Packed with jaw-dropping animation and memorable music, the film tells the tale of young Miguel who travels to the Land of the Dead in his quest to master the guitar.

From longtime contemporary dance champions Liz Roche Company, WRoNGHEADED (Tue 22 May) has only gained potency since its premiere at Tanzhaus, Dusseldorf in 2016. The piece merges contemplative film work by Mary Wycherly, fierce poetry by Elaine Feeney and live dance into an uncompromising commentary on women’s rights and freedom of choice in modern Ireland.

Be a part of Pavilion Theatre history! Our first-ever live satellite broadcast, Macbeth (Thu 10 May) from London’s National Theatre, takes place this May. You’ll get the best seat in the house for Shakespeare’s timeless classic starring Rory Kinnear (Black Mirror), relayed in crisp HD picture and sound to our big screen.
Returning to our pre-recorded National Theatre Live Encore series, Salomé (Wed 23 May) by Yaёl Farber is a charged retelling of the biblical story. Also directed by Farber, the visionary behind our 2013 smash hit play Nibhaya, Salomé presents a whole new perspective on a familiar tale.
Our first Exhibition on Screen film of the summer programme invites cinemagoers to the opening night of new exhibition a London’s National Gallery. The artist on display? Leonardo (Thu 24 May), renaissance master and universally lauded genius. With compelling narration by Tim Marlow, this documentary focuses on da Vinci’s life story and a selection of his greatest masterpieces.
A new addition to our burgeoning Event Cinema line-up, London-based Classic Spring Theatre Company are recording Wilde’s most popular plays for cinemas as part of the Oscar Wilde Season. A Woman of No Importance (Sun 27 May), a comedy of manners fused with heady melodrama, is sure to start the season with a bang.

Whether you’re a Monday Night Cinema veteran or thinking about diving into our curated programme for the first time, now’s your chance to get the most from a Season Ticket! It’s the best deal in town at just €60 for 12 weeks of critically-acclaimed international films. There’s plenty to look forward to in May, including Russian family drama Loveless (Mon 7 May), Japanese courtroom thriller The Third Murder (Mon 14 May), otherworldly Hungarian romcom On Body and Soul (Mon 21 May) and French AIDS activist film 120 BPM (Mon 28 May).
____________
Phew… We’re sure you’ll agree that our May programme is so hot it’s practically burning a hole in your screen! Tickets for all events are available with free booking online, or by calling our Box Office on (01) 231 2929. Join the conversation by dropping us a line on Facebook or Twitter.