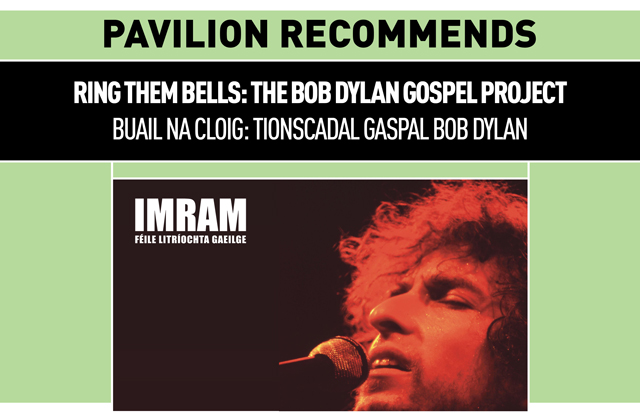 After a fan threw a silver crucifix onstage during a particularly gruelling stop on his 114-date 1978 world tour, Bob Dylan began a journey into born-again Christianity.
Brimming with newfound enthusiasm, Dylan recorded two albums of gospel-inspired songs (Slow Train Coming and Saved), played songs exclusively during his 1979 and 1980 tours and even discussed his faith on stage with the audience.
Bono’s favourite Dylan record, Shot of Love, appeared in 1981. Carrying on the gospel aesthetic of its predecessors and featuring a career-best vocal performance, it nevertheless featured a more even mix of born-again and secular material. Dylan’s transition back to a more familiar musical approach was fully realised on 1983’s Infidels.

According to festival director Liam Carson:
“The word IMRAM can mean a ‘voyage of discovery’ and the festival takes its audiences on a magical journey that reveals the depth and diversity of modern literature in Irish, through eclectic and imaginative event programming that fuses poetry, prose and music in lively venues. IMRAM has also featured film, drama, puppetry, debates, lectures, and writing workshops for both adults and children.
IMRAM’s core mission is to bring writers and readers – and particularly new readers – together.
IMRAM’s message is positive – and places the Irish language and its literature at the heart of public life within a modern, energetic and multicultural framework. IMRAM also works as a highly effective publicity mechanism that attracts much-needed media attention to Irish language writers and books.
IMRAM has built on its success year-by-year, building audiences, and bringing Irish language literature to the streets of Dublin, in an annual festival that is now an integral part of the city’s cultural life.”
___________________
Tickets for this brilliant night of ceol agus craic are available now from our website (free booking online) or by calling (01) 231 2929.