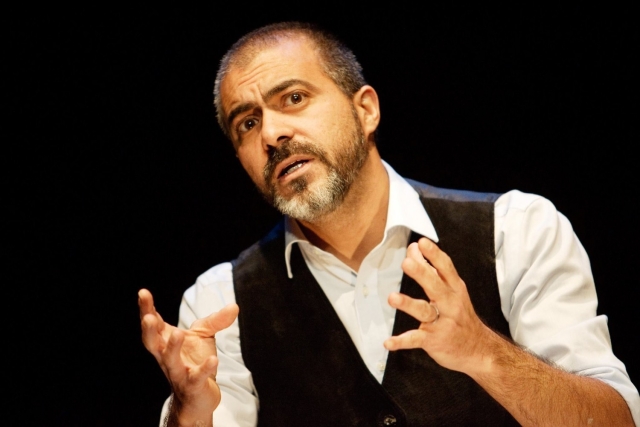 Bassam Aramin is a Palestinian who had been a Fatah Freedom militant and served seven years in prison in Israel. Years later, his 10 year-old daughter Abir, was killed by an Israeli soldier, but amazingly he chose not to seek revenge. Instead he forgave and went on to co-found Combatants for Peace with Elik Elhanan, an Israeli. His story, entitled Bassam, has been written by Idan Meir, an Israeli director living in Sligo and it is performed as a one-man show by a Palestinian actor based in Donegal called Fadl Mustapha.

Fadl Mustapha responded to some questions.

Have any of your own life experiences prepared you for this role?

I have always explored methods of expressing my opinion about the Middle East conflict, the outcomes and the history behind it, but I never expected to be able to use the art and theatre as a form of expression. Being born into a refugee status from parents and grandparents of refugees since the ‘Nakba’ (Catastrophe) in 1948, I believe I have been prepared for this role all my life. The cynicism and the anger is within me just as much as it is within Bassam, but I will not compare the loss of a daughter to a loss of a home, country and roots, but loss is loss and due to the displacement and the situation that was imposed on my family and because of their status and the volatile circumstances that arose in Lebanon, they also lost family members due to the violence.

Has your work on Bassam altered how you view conflict in general or in your own relationships?

I had a massive build up of anger, frustration and general blame towards everyone who played a role in the conflict, but things changed inside of me, there was a crack in my shield, mainly due to the play but also due to the fact that the piece is written by an ex-Israeli soldier, Idan Meir, from a Palestinian perspective and that in a way surprised me, because to be honest I was sceptical and cynical; I thought to myself what does an Israeli have to say about the Palestinian situation, how can they empathise with a Palestinian? But I grew up in a home that wasn’t geared towards violence and didn’t believe that violence is the answer to solving anything especially the Middle East conflict, … so in a way my view on conflict has altered a little but more so my actions in playing a part for change has been altered dramatically, and because of that, my anger is more controllable in both my view towards the conflict and my personal relationships.

What message do you think the play has for the people of Northern Ireland?

During our first tour in 2012, we were surprised by how the audience were willing to open up and share their stories with us mainly about the Northern Ireland Conflict, especially in venues that were either in Northern Ireland or in towns and venues on the border, and we both realised how there is a lot of similarities in all conflicts, how stories are parallel and how people’s experiences aren’t much different. I think it is the people in the Middle East that can learn more from the Northern Ireland conflict rather than the other way around, because what you have here is a form of reconciliation that has allowed both parties from either side to set up channels of communications that allows dialogue in order to build up for change and that is what is lacking in the Middle East conflict. There is still a lot of fear in both conflicts but in the Middle East  the government uses that fear to gain power and control over their people, the governments feed off this fear.

Where do you see hope today in Palestine and in Israel?

It does seem like a hopeless situation to many especially from the outside, but to me hope is what feeds my perseverance. Without hope and belief that things will change is admitting that we have lost, but we cannot do that, we cannot stand by idly as spectators because if we do that then we become complicit by our complacency. We cannot do that for our sake and for the sake of our children and future generations, for the sake of all those who lost their lives, we owe it to them. Change is coming in the form of awareness, in the form of action, there are a number of movements and organisations that are working towards change whether in Palestine, Israel or around the world, non-violent organisations such as Boycott, Divestment and Sanctions (BDS) are having a huge impact on forcing change, organisations such as Combatants for Peace are also using different tools to create change, we are using the art to promote peace and create hope and I believe more should be done and more people should do whatever they can to contribute in bringing awareness and create hope and change.

This interview originally appeared on CultureHub.co.uk