Charlie Bird Drops into A Day in May Rehearsals 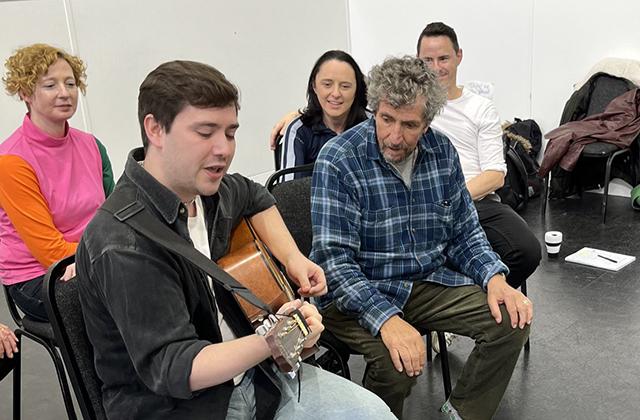 Fresh from a moving and uplifting appearance on RTÉ's Late Late Show, journalist and broadcaster Charlie Bird dropped into the rehearsals for A Day in May by Colin Murphy this week to say hello.

Charlie's book of the same name was adapted for the stage by Colin Murphy (The Treaty, Haughey/Gregory) and will be directed by Gerard Stembridge for a limited run of five performances from Wednesday 26 to Saturday 29 October 2022 - including a 2.30pm matinée on Saturday. The show is presented by Pat Moylan Productions and Pavilion Theatre, in association with A Day in May Trust.

There are lots of things happening in my world at present. My book Time and Tide, will be on the bookshelves this weekend. Today I was at the rehearsal of the play A Day in May which will be on stage at the Pavilion Theatre starting on the 27th of October. Even Tiger joined in. pic.twitter.com/fa4L4UC37D

He extended the hand of friendship to the cast, which includes Orla Fitzgerald, Conor Gormally, Anthony Kinahan, Mary Murray, Marion O’Dwyer, Mark O’Regan, Arthur Riordan and Sarah-Jane Scott as they prepare this emotional rollercoast of documentary theatre for a public audience. The show tracks the emotional and often-hilarious stories of Ireland's LGBTQ+ community in the leadup to the historic 2015 Marriage Equality Referendum.

The play A Day In May was written by Colin Murphy from the interviews that I did with the LGBTI community after that great day in May 2015 when the people of Ireland extended the hand of friendship and voted for marriage equality . It is a day I will not forget as long as I live.

Of this production, Charlie Bird said:

"When an email dropped into my inbox saying that A Day in May would be coming back to the stage, I was overcome with joy. Since my diagnosis, I have had a burning desire to see this incredible production revived. My involvement in the Marriage Equality Referendum - and the subsequent book and play that resulted - is one of my proudest achievements" - Charlie Bird

Two charities very near and dear to Charlie's heart - Pieta and the Irish Motor Neurone Disease Association - are being supported as part of this very special production.

Book tickets for A Day in May here.