Cultural Activities from the comfort of your own home 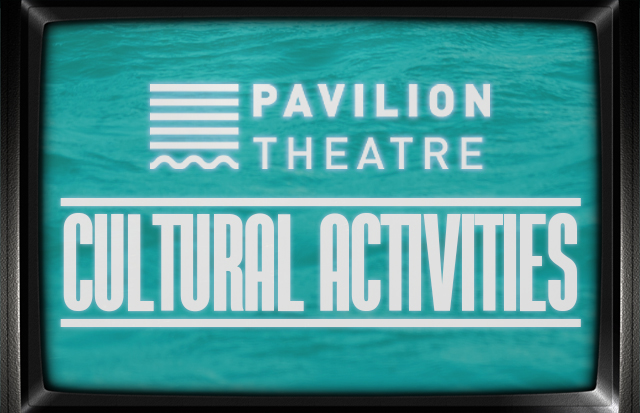 ARTS   |   THEATRE & OPERA   |   MUSIC   |   FAMILY   |   FILM   |   CREATIVITY
Pavilion Theatre remains closed, so while we can't keep you entertained in our usual way, we've been scouring the internet for the best cultural activities you can access from the comfort of your own home.
There are free theatre, opera and film events, online classes and activities for little ones! Hopefully this will help to stave off cabin fever while we all do our bit to stay indoors and flatten the curve.
We'll be keeping this blog updated every week so be sure to save this link or check our website homepage for updates.
In the meantime stay safe and well!

One - Healing With Theatre
Pan Pan’s intimate and revealing theatre project, ONE — Healing With Theatre returns for a special durational event. In 2005,100 actors were visited in their homes and asked to answer one simple question: Why did you become an actor? Tune in on their YouTube channel on Thu 22 & Fri 23 Apr, any time from 2-9pm to watch the full 14-hour film over two seven-hour sessions. Stay for as long or as little as you like.
Bring on the Bollywood
Written and directed by Samir Bhamra - the master of authentic Bollywood inspired work - this recording of the Bollywood dance-theatre extravaganza will be available to watch on demand for free from Fri 16 April. Find out more here.
Panti Bliss: High Heels in Low Places
In this hilarious and poignant show, Panti traces her journey from small-town boy kicking against traditions; to towering plastique woman in false lashes making history, exposing the stories behind the make-up to reveal the National Treasure she is today. Find out more and book your tickets here.
Cirque du Soleil
The world-famous performing troupe are releasing excepts from their best-loved productions as 60-minute premieres on their YouTube channel.
Coming up next:
Spotlight On - Corteo: Watch Now
Spotlight: Éire to the World
This film showcases Black Irish creatives and artists together in a way that hasn’t been seen before. Filmed over three days in December, the work showcases music, spoken word, acting, podcasts and fashion featuring live performances and discussion from Jafaris, Tolü Makay, Jyellowl, Aby Coulibaly, Felispeaks, UNQ, Adaeze and more. Watch the film back here.

Me, Mollser (Abbey Theatre)
This specially filmed version of Me, Mollser puts the character of Mollser from Sean O’Casey’s The Plough and the Stars, centre stage. This compelling, funny and poignant performance is designed specifically for schools with access to an English, Irish or ISL version, as well as learning resources and lesson plans. The performance is free online from Mon 12 Apr, but registration is required. Find out more here.
Miss Julie
New Earth Theatre and Storyhouse present a new, live streamed adaptation of Strindberg’s thrilling psychological drama Miss Julie. Adapted by Amy Ng, this classic is relocated to 1940s Hong Kong, where Julie is the daughter of the island’s British governor. Find out more and book ticket here (available until Sat 17 Apr).
The Picture of Dorian Gray by Oscar WIlde
In this modern adaptation of Oscar Wilde’s novel, the Victorian narcissist Dorian Gray is reborn as a social media influencer played by Fionn Whitehead with a supporting cast including Stephen Fry and Joanna Lumley. Find out more and book your ticket here. (Available unti Sat 17 Apr)
Cruise
Jack Holden (War Horse, Lewis) stars in his own one-man play set in Soho in the 80s against the backdrop of the Aids crisis. Directed by Bronagh Lagan, with an electro soundtrack from John Elliott, it is inspired by a true story Holden heard while he was volunteering for Switchboard, the LGBT+ listening service. Available from Thu 15 – Sun 25 April, you can find out more and book tickets here.
OperaVision
This opera streaming platform has a rich archive of opera and dance productions from across Europe, all of which are available to watch for free! View upcoming productions here or watch back previous streams on their YouTube channel.
Coming up next:
Prokofiev's Romeo & Juliet (Polish National Opera): Fri 16 Apr, 6pm
The Metropolitan Opera: Nightly Opera Stream & On Demand
Every night, The Metropolitan Opera will release live recordings from their performance archives. The operas go live each night at 12.30am on the Met's website and are available to watch for 23 hours.
Coming up next:
Verdi’s Luisa Miller: Mon 12 Apr
Massenet’s Cendrillon: Tue 13 Apr
Tchaikovsky’s Iolanta and Bartók’s Bluebeard’s Castle: Wed 14 Apr
Mozart’s Die Zauberflöte: Thu 15 Apr
Humperdinck’s Hansel and Gretel: Fri 16 Apr
Dvořák’s Rusalka: Sat 17 Apr
Puccini’s Turandot: Sun 18 Apr
Rossini’s La Cenerentola: Mon 19 Apr
They also have a huge selection of live and on demand events for audiences to enjoy from home. You can find out more and buy tickets here.
Coming up next:
Wagnerians Live in Concert: Sat 8 May, 6pm
The Importance of Being Earnest by Oscar Wilde
Oscar Wilde’s classic comedy of manners is uprooted from London and Hertfordshire to the modern-day north of England in this hilariously funny digital production. Available from Mon 19 Apr – Tue 4 May, you can find out more and book your tickets here.
National Theatre at Home
The National THeatre are back online with a selection of unmissable theatre from their archives incuding Amadeus, The Cherry Orchard, Angels in America, Cat on a Hot Tin Roof, Coriolanus, Othello and more. Their 'at home' content can be accessed through a subscribtion or a pay on demand option. Find out more here.
Irish National Opera Online
Irish National Opera have made their lockdown series Seraglio as well as a selection of their recorded performances and broadcastas available to watch for free online, including Orfeo Ed Euridice, Madama Butterfly, Acis & Galatea and The Barber of Seville. Click here to find out more.
20 Shots of Opera: Watch Now
Production Streams: Watch Now
Seraglio - The Mini Series: Watch Now
Druid Theatre
Druid Theatre has made recordings of five productions available to watch online for free.
Deirdre of the Sorrows: Watch Now
The Well of the Saints: Watch Now
The Playboy of the Western World: Watch Now
Riders to the Sea: Watch Now
The Shadow of the Glen: Watch Now

Me, Mollser (Abbey Theatre)
This specially filmed version of Me, Mollser puts the character of Mollser from Sean O’Casey’s The Plough and the Stars, centre stage. This compelling, funny and poignant performance is designed specifically for schools with access to an English, Irish or ISL version, as well as learning resources and lesson plans. The performance is free online from Mon 12 Apr, but registration is required. Find out more here.
Dr. Seuss’s The Lorax
Streamed live from The Old Vic stage from Wed 14 – Sat 17 Apr, this Olivier Award nominated stage adaptation celebrates the 50th anniversary of the much loved children’s book. Find out more and book your tickets here. There will also be free school performances on Thu 22 April - register for your class here.
Jack and the Beanstalk
Nottingham Playhouse Theatre present this charming production of the family favourite, filled with music, dancing and plenty of opportunities to join in. Suitable for ages 3-8yrs and their grown-ups! Availale from Fri 16 April, you can find out more and book your tickets here.
Myths and Adventures from Ancient Greece
In a four episode series, tales from ancient Greece are brought to life in a fun way for kids to engage with the Greek myths. Suitable for ages 3-8yrs, the short performances are available to watch on YouTube.
Draw with Don!
Beloved artist Don Conroy, best-known for his long-time stint on RTÉ’s The Den has officially launched his own YouTube channel! Over the coming weeks he will provide free drawing tutorials for both children and adults so tune in here and get creative!
Shh! We Have A Plan - An Opera!
This puppetry adaptation of Chris Haughton’s much loved award-winning book introduce opera to young audiences. Watch Now
Wigmore Hall Learning
Wigmore Hall have moved their learning activity online due to the pandemic which means we can now all access their workshops and resources online! Find out more and book your places here.
Coming up next:
Family Workshop at Home - Faraway Habitats (ages 5-11): Wed 14 Apr, 11am & 2pm
Chamber Tots at Home - Vibrant Landscapes (ages 1-5): Fri 23 Apr, 10am
Project Puppet: Online Workshop
As part of Cruinniú na nÓg 2020 - the national day of creativity for young people - we hosted a series of free online workshops which guided children through the process of storytelling and puppet making. You can now watch back all four workshop videos online - find out more here.

Play & Create with Tall Stories
Tall Stories have put together lots of Play & Create resources on their website with loads to keep you busy at home including colouring sheets, arts & crafts, baking recipes, games and fun worksheets for The Gruffalo, Room on the Broom, The Snail and the Whale and more! Check it out here.

In their At Home section, there are links to video content, story-time readings and an informative and engaging digital book for children explaining all about the virus and the measures taken to control it, illustrated by Axel Scheffler. Check out the Nosy Crow website to enjoy the book.

IFI@Home
The Irish Film Institute have expanded their activitites with a new online programme of film content, exclusive to Irish audiences. Browse their content and rent films here.
The Loopline Collection Volume 2
The Loopline Collection Volume 2 is a new film collection, free to view worldwide on the IFI Player. The collection includes the highly acclaimed four-part documentary series Hidden Treasures, focusing on Irish heritage and folklife, a  a six-part TG4 series on Republic Women, Mná an IRA, and a collection of interviews with seminal Irish and international documentary filmmakers, Where Art Thou? Watch here
Exhibition on Screen Documentaries
Exhibition on Screen's art documentaries are always a hit at Pavilion Theatre, and you can now buy or stream lots of fantastic documentaries from their collection including Vincent Van Gogh, Leonardo, The Impressionists, Young Picasso and more.
Click here to find out more.

​Martin Hayes - Online Lessons
Celebrated fiddle player Martin Hayes will be releasing a series of online lessons every two weeks. Tune in to his YouTube channel where you can learn a new tune by playing along.
dlr Library Book Drops
Book Drop services continue to operate for older members of the community or those who are particularly vulnerable during this time.  A selection of books will be delivered to your door from dlr LexIcon. For more information on how to avail of this service click here.
Taking Charge of your Performance Career (Music Network)
Music Network's series of professional development courses are now available to watch back on their YouTube channel. Aimed at helping musicians develop important skills necessary to respond to the music industry’s shifting demands the courses are delivered by industry experts.