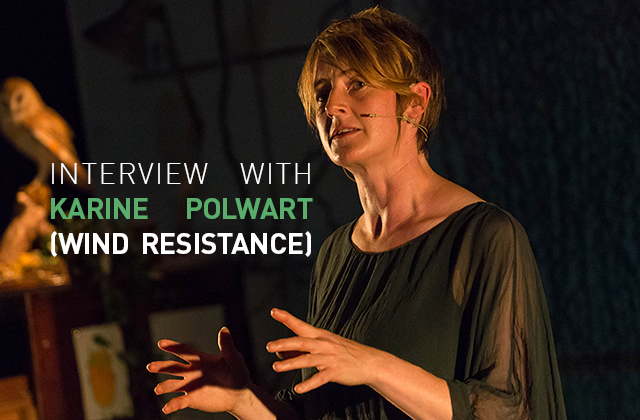 Wind Resistance (Thu 12 - Sat 14 Oct) was the sell-out smash hit of Edinburgh International Festival 2016, and Pavilion Theatre is very excited to be bringing Karine Polwart's stunning solo show to Dún Laoghaire as part of this year's Dublin Theatre Festival. The show, produced in association with the Royal Lyceum Theatre in Edinburgh, explores the wilds of Karine's native Scotland, and weaves together personal memoir, history, storytelling and breathtaking original music. Here's our exclusive chat with Karine ahead of this first-ever Irish staging of Wind Resistance...
________________________________

If she had to describe Wind Resistance in three words, they would be... 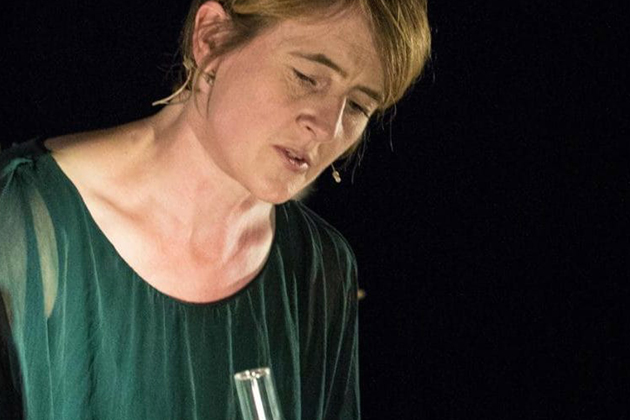 On the themes explored in the show... 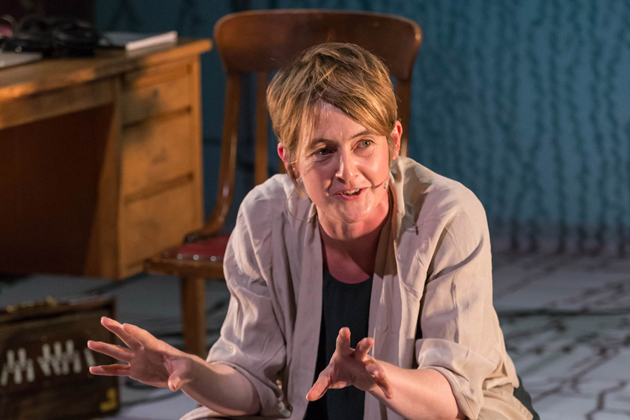 In autumn 2015, I heard, from my back door step in Pathhead, Midlothian a familiar, welcome sound. I cocked my neck to the sky and smiled as a skein of pink footed geese clattered overhead. They were nearing the end of an epic annual journey from the glaciers of Greenland to their wintering grounds two miles beyond my home village at Fala Moor.  And I wondered: why do they fly like that, in those hypnotic, snaky skeins? That moment of curiosity forms the basis for what has become Wind Resistance.
A fleeting question became an obsession as I fell to reading about flight science and sphagnum mosses, ancient bird lore and the ethical mire of contemporary land management. I was amazed to learn that my unassuming local heather moor is a Special Protected Area under European environmental law, and that two and a half thousand of those pink footed geese land each year at Fala Flow, the small lochan at the heart of it.
I began also to connect the ecological wellbeing of the bog land itself with the history of a medieval monastic hospital that overlooked Fala Moor from Soutra Hill in the north Borders. What I learned about the surgical and medicinal innovations of the twelfth century priests resonated with my own experiences of modern maternity care, and with the hidden stories of other mothers who once inhabited my local landscape.
The image of the goose skein seems symbolic: its evolved elegance in conserving energy; its intrinsic dance of togetherness; its collective sturdiness. To me, it calls up our own ways of journeying through life as people, how we do, and don’t, cultivate places of sanctuary, healing and connection with one another when the wind is in our faces.
I worry about the weather that’s to come, and, through the show, I wonder: in our communities and societies, have we created anything as resilient as a skein for people, anything that might outlast this era of austerity, creeping isolation and individualism? To what extent do we really have one another’s backs?
Co-operation. Collaboration. Protection. Healing. These are core themes of Wind Resistance. They’ve characterised also the spirit with which the creative team has dedicated itself to this show and enabled me to combine my love of birds and song, parables and myth, local history and ecology, ethical and political inquiry and football (oh yes, I didn’t mention that) into a piece that has dramatic and philosophical coherence.

On the audiovisual elements audiences can expect... 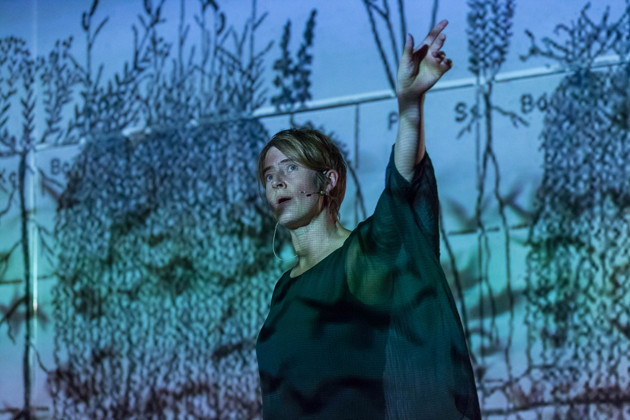 My local peatbog is the epicentre of the show and the sound and staging reflects this.
Sound design and both pre-recorded and live music are threaded together. As live performer, I move between speech and sung lines, often in the course of a single phrase. And I interact with pre-recorded voice, music and sound, sometimes almost as if I were part of a choir. I’m a folk singer and musician first, so music and sound is the bedrock of the piece rather than grafted on. It’s not only underscore or scene setting. It also drives narrative content and holds recurring imagery too.
In the soundscape, we hear skylarks and red grouse, pink footed geese and water boatmen. And this outdoor landscape is mirrored by a more interior and hospitalised experience of labour wards and operating theatres, foetal heartbeats and Doppler monitors.
Visually, much of the show is about what cannot be seen, what’s hidden or buried, and needs bringing forth. There are Victorian scientific gridlines and dangling root systems, test tubes and vials, seedpods and glasses, bracken and bone, and a moon-faced barn owl surveying it all. The moor landscape and its birdlife is glimpsed through abstract film sequences projected against the set, and upon my body as I move through it.
And all of these audiovisual elements support the central storytelling rather than character driven nature of the piece.

On the challenges of being a longtime musican working in theatre for the first time... 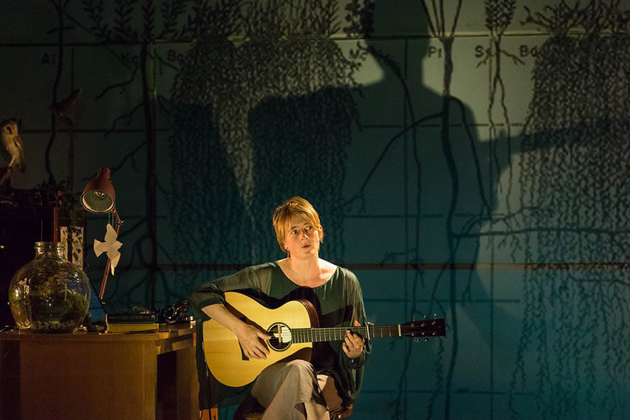 It's been a challenge, but also a thrill. For a first theatre venture, I’ve been immensely fortunate to work with such an experienced and well-resourced creative team. The support of the Royal Lyceum Theatre and Edinburgh International Festival in getting the work to the stage has been a gift. For me, it’s been a personal liberation to work on one overarching narrative arc, across a whole piece.
Songs are beautiful canvases, but also small. This has allowed me to create something thematic, with cumulative, and almost cinematic weight. It’s transformed how I want to make new work too. I’ve discovered also that I can move! The performance conventions of folk song are quite static. But in this work, I’m able to spin and fly, and to tell the story almost as much with my hands as with my voice, or my instruments. I get to take up space. And that’s an unexpected delight.

On the soundtrack album for Wind Resistance...

Some of the tracks reflect what’s in the show almost exactly. But around half of it is freshly conceived as a listening experience. Once you take away the visual, spatial cues of movement, staging, light, and film, sound and music have to do a very different job. As a result, some spoken passages have been reimagined into song. Others have been condensed into rythmic incantation, or underscored as spoken word. Some elements don’t make it onto the album at all. The narrative and emotional arc remains the same though. So the album works as both a sister to the show, and as a work in its own right.
It’s a very different album than any previous album of mine, simply because it’s not a collection of songs. It’s a journey for the ears that combines song, story, speech and sound.  And it’s crafted as a whole piece, with a core thematic intent, rather than as an assembly of discrete parts. The process of putting it together has also been much more allusive and painterly than ever before, because my collaborator and friend Pippa Murphy is both a sound designer and composer. For me, she’s opened up new ways of thinking about music, about how words sound, over and above what they mean, about sonic textires and palettes, about intersecting layers, and about how non verbal sound becomes meaningful according to the context its placed within.  It’s really exciting to work in this way. And it’s changed how I’ll make work in future. 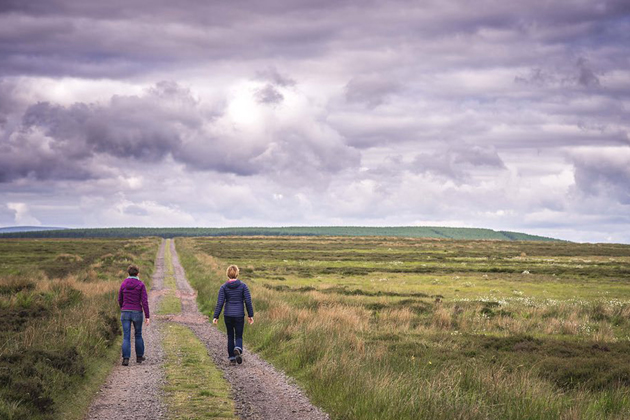 Ideas in the pipeline include a possible orchestral work in collaboration with Pippa, and roote din Scottish myth and balladry, a theatrical exploration of forests and fairy stories, an album of new songs with my trio and an illustrated children’s book.
________________________________
Wind Resistance (Thu 12 - Sat 14 Oct) is part of Dublin Theatre Festival and tickets are available on our website (no booking fee), or alternatively by calling our Box Office on (01) 231 2929.