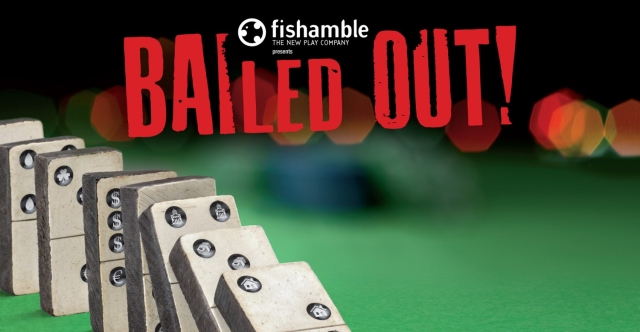 Bailed Out! is the sequel to Guaranteed!, which told the story of the bank guarantee of September 29, 2008. Bailed Out! picks up that story and follows it through to the early months of the new government in 2011.

In between these plays, I adapted Guaranteed! for the screen (as The Guarantee, directed by Ian Power). My seven-year-old daughter, Sadhbh, joined me on set one day, and we stood behind the camera watching repeated takes of a particularly intense moment between Brian Lenihan and Brian Cowen.

That evening, her siblings asked her what she had seen; she described the scene we had watched. “One man said, ‘We should nationalise them’,” she said. “And then the other one said, ‘I’m not fucking nationalising anyone’.”

This left four-year-old Iseult with a question. “What’s ‘nationalising’?” she asked.

Another memorable line from the documentary record was “picked it out of my arse”. This was the explanation by Anglo banker John Bowe as to how his boss, David Drumm, had calculated the figure that Anglo was requesting in emergency loans from the Central Bank - €7 billion.

That line was first heard by the public on the morning that Guaranteed! opened, which was, by coincidence, the day the Irish Independent broke the ‘Anglo Tapes’ story.

I had worried that we might be too late with our play; the bank guarantee was already five years old. But, suddenly, we were uncannily topical.

As with Bailed Out!, Guaranteed! was being pitched as a drama-documentary in a “pop-up” style. Making a virtue of economic necessity, I had suggested that carrying scripts would allow us to respond to changing events. And now, the day the play opened, events had changed.

I threatened to write a new scene, but ultimately fixed it with just one new line. After Drumm (Peter Daly) asked for the seven billion, there was a pause; then the Central Banker (Mark Lambert) asked him from where he had got that figure. You could almost hear the audience roar, in their heads, “he picked it out of his arse!”

The scripts themselves became a key prop. The presence of the scripts serves as an acknowledgement that this isn’t made up - it is an account of recent history that closely follows the factual record.

I write this on the eve of our first rehearsal. As before, I worried that we would be too late with our play. But the banking inquiry keeps these events on the front pages; this coming week, a number of my “characters” will take their turn before it.

That means the script remains open. My sources are good, but these final inquiry hearings will inevitably add useful detail - and may add further memorable lines to the public record.

Broadly, “public" moments in the play are based on transcripts and news reports; “private" moments are fictionalised, informed by my research and often first-hand sources. I’m a newspaper journalist by trade, and the scripts being carried on stage remind me of newspapers. They are a first draft of history, subject to change, only as good as their sources.

Though we have used the phrase “drama-documentary”, I’m still not certain that’s accurate. This is not documentary: I have taken liberties with the factual record, merging events and characters, and have liberally invented dialogue.

But it is a true story, and I have told it as rigorously and as factually as I can. The invention serves the purpose of making it possible to tell it with five actors, in ninety minutes.

Truth is stranger than fiction, wrote Mark Twain. The corollary is that truth often needs to be “fictionalised” (or dramatised) to be made coherent. (A good dramatisation of the recently-published Fennelly Report would make for an instructive example.)