Breeze into October at Pavilion Theatre 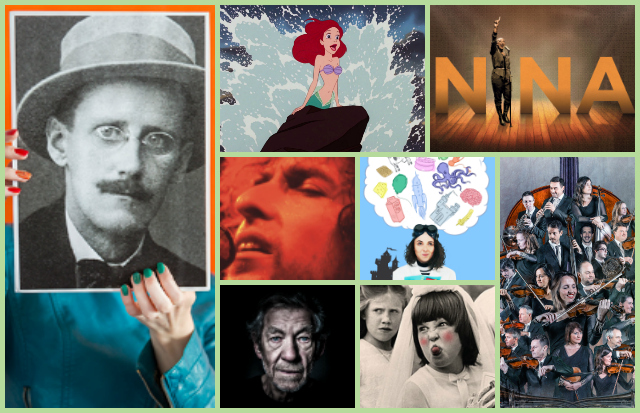 Between Dublin Theatre Festival, national and international performers, family events, music, dance, cinema and everything in between there’s never been a better excuse to stop into Pavilion Theatre as the evenings get shorter! Let’s take a quick look at what October has in store…
_____________

Fresh from a barnstorming premiere and four stars in The Irish Times (“ingenious, exhilarating fun”), Rough Magic’s A Portrait of the Artist as a Young Man by James Joyce must end on Sun 7 Oct. Don’t let one of the headline shows of Dublin Theatre Festival 2018 pass you by!
An explosive, politically-charged combination of theatricality and musicianship, Nina: A Story About Me and Nina Simone (Wed 17 Oct) features Olivier nominee Josette Bushell-Mingo (The Lion King, West End) mixing story and song in celebration of Nina Simone’s extraordinary career.
Crafted by one of Ireland’s most beloved writers, Holy Mary by Eoin Colfer (Thu 25 Oct) tells the hilarious and heartwarming story of two nine-year-old arch rivals as they prepare for the social occasion of the year: their First Holy Communion.

Always a highlight of IMRAM Festival, Gabriel Rosenstock has once again translated the work of a landmark musical artist into Irish with Ring Them Bells: The Bob Dylan Gospel Project (Buail na Cloig: Tionscadal Gaspal Dylan) (Thu 18 Oct). Featuring singing from Liam Ó Maonlaí and a full band, it promises to be a treat for Dylan fans and Gaeilgeoirí alike.
The Irish Chamber Orchestra (Sat 20 Oct) returns to the breathtaking surroundings of Monkstown Parish Church for Night Music, an intimate and relaxed evening of classical treats by Mozart and Tchaikovsky.
Omagh singer Donna Taggart (Sun 21 Oct) first rose to prominence with her multi-platinum hit Jealous of the Angels and now she’s bringing her distinctive, emotional singing style to our stage.
Following huge success at the Cork Jazz Festival, Ladies in the Blues (Wed 24 Oct) carry on the spirit of iconic female blues singers like Big Mama Thornton, Billie Holiday, Ella Fitzgerald, Etta James and Janis Joplin in a “spectacular” (The Irish Times) live show.
Red Hurley (Fri 26 Oct) is no stranger to live performance, with almost 50 years in the music business under his belt. Come and hear classics like Amazing Grace, How Great Thou Art and Danny Boy from one of the most celebrated singers Ireland has produced.

After enthralling audiences with last year’s Generaciones, Compañía María “la Serrana” is back with more sizzling Flamenco from Seville (Tue 30 Oct). On the Shoulders of Hercules (Los Hombros de Hércules) brings together traditional flamenco singers, dancers and guitarists of the highest calibre.

Garnering rave reviews and audience acclaim at Dublin Fringe Festival, Bombinate Theatre’s Susie and the Story Shredder (Sun 21 Oct) makes its Dún Laoghaire debut. Pavilion Theatre proudly supported the development of this wonderful show for ages 7 and older, and we can’t wait to see it on our stage.
Our best friend Bosco is on her 40th Anniversary Tour and she’ll be making an appearance as part of Bosco’s Garden and Snow White (Sun 28 Oct). The Paula Lambert Puppet Theatre always puts on a hugely entertaining, interactive show for all ages and this year’s is sure to be extra special.

For the first time, Pavilion Theatre is playing host to DeptCon 4 (Fri 12 & Sat 13 Oct), Ireland’s biggest and best Young Adult book convention! With dozens of panellists including Melinda Salisbury Tom Pollock Brian Conaghan and Connie Glynne, this YA extravaganza has been put together by the fine folks of Department 51 at Eason.
Join best-selling writer and raconteur Michael Harding (Fri 19 & Sat 20 Oct) as he reads from his latest memoir On Tuesdays I’m a Buddhist. Never any less than enlightening, insightful and utterly hilarious, it’s no surprise tickets for both nights are selling fast.

Sir Ian McKellen (Lord of the Rings, X-Men) gives a breathtaking swansong performance in the title role of King Lear (Tue 16 Oct) as part of our National Theatre Live: Encore series.
With music by Franz Liszt and choreography by Kenneth MacMillan, our encore screening of Mayerling (Sat 20 Oct) from The Royal Ballet is an intense, passionate and scandalous political thriller set in Germany’s Habsburg Empire.
Join in the excitement of a live Royal Opera performance with our live satellite broadcast of Die Walküre (Sun 28 Oct) from London. This new production of Richard Wagner’s magnum opus promises to be an unforgettable evening of world-class opera – from the comfort of our cinema.
What better way to celebrate Halloween than with Mary Shelley’s 200-year-old horror masterpiece Frankenstein (Wed 31 Oct)? Filmed at London’s National Theatre, directed by Oscar-winner Danny Boyle and starring Benedict Cumberbatch as The Creature, this is the definitive production of a scary classic.

Exploring the life of unconventional and controversial fashion designer Alexander McQueen, documentary McQueen (Tue 9 Oct) tells a haunting story of extravagant talent, restless creative energy and inescapable private sorrow.
Two family classics go back to back on Sun 14 Oct, with Disney’s 1989 underwater masterpiece The Little Mermaid (2pm) and their modern smash hit Frozen: Sing-Along (4pm).
Following a group including Oscar-winning musician Glen Hansard as they follow an ancient route from Ireland to Northern Spain by sea in a boat they built themselves, The Camino Voyage (Sun 14 Oct) is a fascinating and unique documentary told through Irish and English.
Dublin Animation Film Festival (Sat 27 Oct) is back with a smorgasbord of short animated films, awards ceremony and a feature presentation of Cartoon Saloon’s Oscar-nominated The Breadwinner followed by a Q&A with the creative team.
Monday Night Cinema continues this month with Paraguayan drama The Heiresses (Mon 8 Oct), Oscar Wilde biopic The Happy Prince (Mon 15 Oct), Icelandic thriller Under the Tree (Mon 22 Oct) and American indie gem Leave No Trace (Mon 29 Oct).
_____________
We look forward to welcoming you to some of the fantastic events in our October programme! Tickets are available with free booking online or, alternatively, by calling our Box Office on (01) 231 2929. You can also keep up with us on Facebook, Twitter and Instagram.