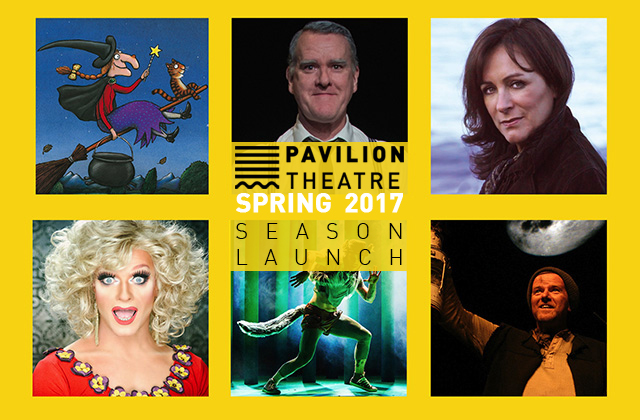 We’re delighted to announce the launch of our brand new season! There are dozens of incredible shows lined up this spring across all genres of the performing arts. With everything from drama and comedy to music and dance, you’re bound to find something to pique your interest in our brochure.

The full programme is available right now as a digital document and tickets for all of our events are already on sale - so if you see something you know you’ll love, book for free online or call our box office (01-2312929) before they're all gone.

Here is just a small selection of the things coming up this season at Pavilion:

After huge success with last year’s The Weir, Conor McPherson is bringing This Lime Tree Bower to Pavilion. It’s a funny, affecting play about three young men whose lives are inextricably linked

Fresh from a sold-out run in the City Centre, this interpretation of Joyce’s short story is a heady mix of live strings, singing and drama

Back thanks to popular demand, Fascinating Aïda’s Dillie will be sure to delight audiences with some of the finest cabaret ever to grace the stage

Des Keogh and Denny Power star as two older farmers who often reminisce together, but must now test the strength of their relationship. The Scotsman calls it a "perfectly-pitched pair of performances”

Surely one of our greatest exports, experience drag queen extraordinarie Panti’s hilarious, heart-warming show for yourself

The incredible story of the Francis Ledwidge, Ireland’s greatest war poet, and how his personal conflicts and the ongoing horror of the First World War influenced his art

The Irish Times has said that “no TV camera could accurately measure the lightning speed of Delamere’s wit”. You’ve seen him on RTÉ and BBC, but you haven’t had the full Neil experience until you’ve seen him live!

The Humours of Bandon [DRAMA]

From Fishamble, this is a touching, hilarious coming-of-age story about 16-year-old Annie, who is trying to win a national Irish Dancing championship. Directed by Stephanie Preissner (Can’t Cope, Won’t Cope)

Starring Garrett Keogh (The Weir) and Michael Hayes (Vodafone’s “pig” ad), this play follows the disruption caused at a small Midlands newspaper in 1916 when new owners bring in big changes

Once again, the Pavilion Spring 2017 Brochure is available here and tickets for all events are available now. A very happy Christmas from Pavilion, and we look forward to seeing you at one of our fantastic events in the New Year!