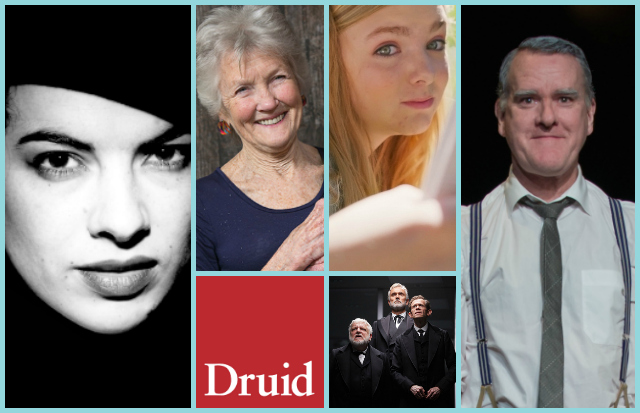 Before we bid farewell to June there is one more spectacular theatre show to look forward to: Brothers of the Brush by Jimmy Murphy (Sat 29 Jun). A tale of three house painters scraping by in the early days of the Celtic Tiger, it was a breakout hit at the 1993 Dublin Theatre Festival and this fantastic all-star staging demonstrates that Murphy’s play is more relevant than ever.
Based on Shakespeare’s tragic poem of the same name The Rape of Lucrece (Wed 3 & Thu 4 Jul) is a staggering, hypnotic musical performance by singer Camille O’Sullivan with pianist Feargal Murray brought to Pavilion Theatre after its acclaimed run at the Gate Theatre. This truly special production was described by The Irish Times’ Fintan O’Toole as “the most significant Irish Shakespeare in centuries”.
Ahead of its world premiere at Galway International Arts Festival, we are proud to be hosting two preview performances of the latest production from Druid: Epiphany by Brian Watkins (Fri 12 & Sat 13 Jul) . The play follows a group of friends at a dinner party and its stellar international cast includes Jude Akuwudike, Grace Byers, Bill Irwin, Kate Kennedy, Julia McDermott, Aaron Monaghan, Marie Mullen, Rory Nolan and Marty Rea.
More than 8,000 patrons have seen Mikel Murfi’s astonishing solo plays at Pavilion Theatre over the past six years, and we’re delighted to welcome Mikel back for five nights in July performing The Man in the Woman’s Shoes (Tue 16 - Thu 18 Jul) and I Hear You and Rejoice (Fri 19 & Sat 20 Jul). Several nights are already sold out, so book soon if you want to witness Pat Farnon’s emotional journey first hand!

Featuring Carloz Gonzalez whose inspiring story featured in The Irish Times along with a host of other up-and-coming young dancers, we’re proud to once again be hosting the Irish Youth Dance Festival (Fri 5 Jul). The Dublin Youth Dance Company and Dance Ireland promise its 19th year will be another fantastic one.

Legendary folk singer-songwriter and feminist icon Peggy Seeger (Tue 23 Jul) is joined by her son Calum MacColl for a very special concert looking back over her 65-year career. There’ll be readings from her acclaimed memoir, relaxed family banter and, of course, the political anthems she’s become known for.

Directed by Sam Mendes (Skyfall, American Beauty), our latest National Theatre Live screening is The Lehman Trilogy (Thu 25 Jul). Lehman Brothers made headlines during the financial crisis, but the full story of the company takes audiences on a journey through 175 years of history and three outstanding performances by Simon Russell Beale, Adam Godley and Ben Miles.

We’re wrapping up another successful season of Monday Night Cinema in July with four must-see films: Bo Burnham’s coming-of-age masterpiece Eighth Grade (Mon 1 Jul), Shakespearean family drama All is True (Mon 15 Jul) and Icelandic eco-warrior fable Woman at War (Mon 22 Jul).
__________________________________
It’s finally starting to look like summer and we hope you’ll spend those longer evenings in the theatre by the sea. Tickets are available with free booking online or, alternatively, by calling our Box Office on (01) 231 2929. You can also keep up with us on Facebook, Twitter and Instagram.