Decorate your December with Christmas events at Pavilion Theatre! 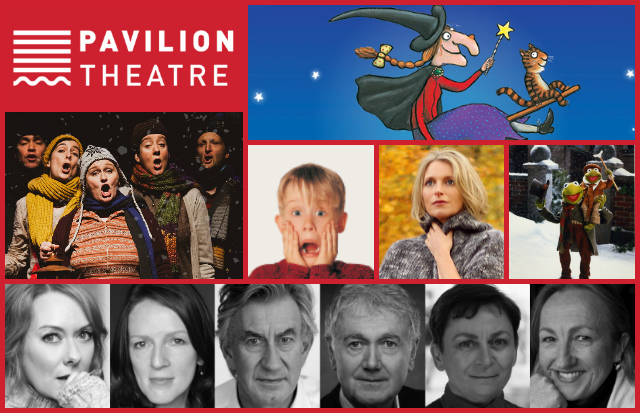 Get inspired by great music, energised by compelling theatre, refreshed by festive storytelling and swept away with family fun as we move into the most magical time of the year.
Let’s take a quick look at what’s coming up at Pavilion Theatre in December…
__________________________________

The acclaimed Branar Teatar do Pháistí bring their innovative and inclusive bilingual approach to the festive season with ‘Twas the Night Before Christmas/Oíche Roimh an Nollaig (Sun 8 Dec), a joyful mix of storytelling, live music and puppetry for all levels of English and Irish.
Always a firm family favourite, Irish National Youth Ballet once again tell the classic tale of The Nutcracker (Fri 13 – Sun 15 Dec), set to Tchaikovsky’s stunning score.
Nothing beats seeing your favourite Christmas film on the big screen, and we’ve got a selection of brilliant ones the whole family can enjoy: Kermit, Miss Piggy and the gang go Dickens in The Muppet Christmas Carol (Fri 20 Dec), Santa’s helper Buddy discovers New York City in Elf (Sat 21 Dec) and Kevin McCallister goes to war with the Wet Bandits in Home Alone (Sun 22 Dec).
From Tall Stories, the folks behind the smash-hit stage versions of The Gruffalo and The Gruffalo’s Child, we’re so excited to be brining Julia Donaldson and Axel Scheffler’s beloved picture book Room on the Broom (Wed 18 Dec – Sun 5 Jan) to Dún Laoghaire this Christmas! With catchy songs, puppetry and fabulous set design, it really is the perfect family treat.

With a string of successful shows at Pavilion Theatre in 2019 including all four of Pat Kinevane’s solo plays and The Alternative as part of Dublin Theatre Festival, Fishamble close out a great year with the return of a great show: The Humours of Bandon by Margaret McAuliffe (Thu 5 Dec). Set in the world of competitive Irish Dancing, this hilarious play follows Annie as she prepares for the Irish Open championship.

The talented youngsters of Young European Strings School of Music (Sun 1 Dec) are back with Tango till Christmas, which is set to include live tango dancing and, of course, brilliantly performed string music.
Devotees of Agnetha, Benny, Björn and Anni-Frid will be thinking Gimme! Gimme! Gimme! when they hear that the fabulous ABBA Forever (Wed 4 Dec) are on the way. Does Your Mother Know? If not, tell her, because there’s just a handful of tickets left!
No one’s voice is better suited to warding off the hustle and bustle of the holiday season than Eimear Quinn (Sun 8 Dec). The Eurovision winner has been giving winter concerts in Dún Laoghaire for many years now, and with good reason: her ethereal, spiritual music is the perfect antidote to the Christmas rush.

Storytelling is an all-to-often overlooked tradition in the modern age, but A Night Before Christmas (Thu 19 Dec) aims to revive it in style. With live readings of classic tales from the like of Charles Dickens and Patrick Kavanagh by Barry McGovern, Michele Forbes, Cathy Belton and Bryan Murray as well as live music from Lyric FM’s Ellen Cranitch and a guest appearance by author Anne Enright it promises to be a very special night indeed.

Once a respected French Impressionist, Pierre-August Renoir made a startling late-career shift into a far more erotic, fantastic style which won him equal parts controversy and acclaim. Our final Exhibition on Screen documentary of the year, Renoir: Revered & Reviled (Sun 1 Dec) explores this divisive artist’s works and legacy.
What would the world be like if you’d never been born? This is the insight granted to George Bailey by an angel called Clarence in It’s a Wonderful Life (Fri 20 Dec), the timeless story of love, loss, ruin and redemption in a little town called Bedford Falls.
Finally, there’s plenty to look forward to in our final month of Monday Night Cinema for the Autumn/Winter season, including society romance The Souvenir (Mon 2 Dec), Hungarian period drama Sunset (Mon 9 Dec), French comedy The Shiny Shrimps (Mon 16 Dec) and a special seasonal screening of 2005 WWI film Merry Christmas (Mon 23 Dec).
__________________________________
All that’s left to do with a sparkling line-up like that is pop a star on top!
Tickets are available with free booking online or, alternatively, by calling our Box Office on (01) 231 2929. You can also keep up with us on Facebook, Twitter and Instagram.