Take the leap into Pavilion Theatre this February 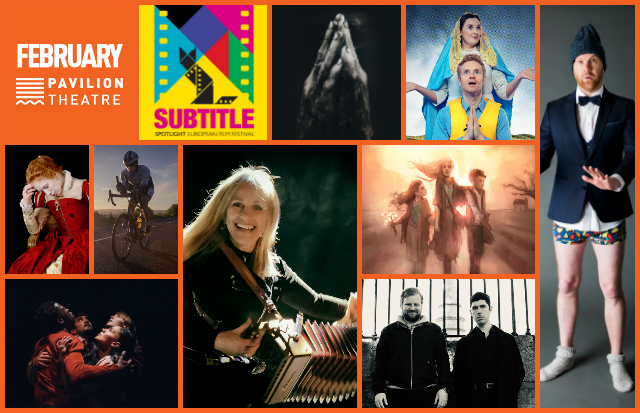 After two barnstorming performances at Pavilion Theatre in 2019, Livin’ Dred’s production of Trad by Mark Doherty (Tue 4 & Wed 5 Feb) is returning to our stage – this time with two Irish Times Theatre Award nominations in tow! Directed by the acclaimed Aaron Monaghan, this hilarious and uniquely Irish play is not to be missed.
Take Off Your Cornflakes (Wed 12 Feb) tells the tender and uplifting story of Tom and Trish, an older married couple who decide to face the challenges of Alzheimer’s disease with humour, music and love.
Based on the real-life hijacking of an Aer Lingus flight in 1981 by an ex-Trappist monk, A Holy Show by Janet Moran (Thu 13 & Fri 14 Feb) is high-flying comedy that’s really taken off with critics and audiences alike.
Two decades after it premiered in its native Tallaght, Howie the Rookie by Mark O’Rowe (Wed 19 Feb) gets an anniversary revival starring Stephen Jones (CLASS) and Rex Ryan. Presented as two finely crafted, connected monologues which are brutal, poetic and rooted in Dublin City.
Featuring a captivating central performance by Rebecca Vaughan, I, Elizabeth (Sat 22 Feb) tells the story of Elizabeth I of England and her views on marriage, succession, religion and war - using only the Queen’s own words.

State of Exception (Tue 25 Feb) is a powerful new work from Catherine Young Dance delving into the world of asylum seekers and Direct Provision. Combining movement, music and text, and performed by a stellar international cast, this is vital and important dance.

Marita Conlon-McKenna’s novel is an international sensation and now the acclaimed Cahoots NI (Penguins, Secrets of Space) has adapted Under the Hawthorn Tree (Sun 16 Feb) into a must-see stage play. Suitable for ages 7 and up, this Great Famine-set survival story is full of hope and love.

In what promises to be a very special evening, endurance cyclist Mark Beaumont (Wed 26 Feb) will take to our stage to discuss his multiple world records, broadcasting career and his recent attempt to bike around the world, Phileas Fogg style, in just eighty days.

Legendary accordionist Sharon Shannon (Fri 7 Feb) has been operating at the top of traditional Irish music for almost 30 years and this concert with accompanist Alan O’Connor will be an exhilarating celebration of her entire back catalogue.
Folk icon and Dubliner Luke Kelly has left a lasting legacy since his untimely passing in 1984, and The Legend of Luke Kelly (Sat 8 Feb) is a fitting tribute to the man and his timeless music as performed by singer-songwriter Chris Kavanagh and his band.
Take a trip down memory lane with Rock ‘n’ Roll Years and Dance Hall Days (Fri 28 Feb), a hip-swinging live show featuring the music of the Everly Brothers, Johnny Cash, The Four Seasons, Ruby Murray, Elvis and many more.
Matthew Gilsenan, James Nelson and Daryl Simpson – known collectively as the Celtic Tenors (Sat 29 Feb) – are returning to Irish shores for a tour celebrating 20 years of global success. Expect three beautiful voices singing arias, a cappellas and well-known pop songs.

It’s been a few weeks since January’s sold-out show and Jason Byrne (Thu 27 Feb) is Wrecked but Ready for another Dún Laoghaire performance! The star of Ireland’s Got Talent is one of the most sought-after comedians in the country and this is a great chance to see him in an intimate venue.

Hit film turned stage musical sensation Kinky Boots (Sun 9 Feb) is strutting from London’s West End onto our big screen! With award-winning songs by Cyndi Lauper this huge-hearted story of unlikely friendship is a dazzling delight.
Due to overwhelming demand we have added a third screening of Phoebe Waller-Bridge’s Fleabag (Sat 15 Feb) which revisits the award-winning solo stage show that inspired the smash-hit BBC comedy series.
Following the sucess of La Traviata, we're heading back to Australia for Aida on Sydney Harbour (Sun 23 Feb). This is Verdi's grand masterpiece as you've never seen it before: on a floating, mirrored stage under the stars.

We’re happy welcome Subtitle Spotlight European Film Festival (Fri 31 Jan – Sun 2 Feb) back to Dún Laoghaire for the third time. The programme this year is better than ever, with ten subtitled films from France, Germany, Sweden, Finland, Iceland and Ukraine across a range of genres.
Our Exhibition on Screen season continues in February with Cézanne: Portraits of a Life (Sun 16 Feb). Regarded as the most influential of the French Post-Impressionists, this documentary takes a closer look at the elusive genius who Matisse and Picasso referred to as “the father of us all”.
And finally we have four great films as part of Monday Night Cinema: French church abuse drama By the Grace of God (Mon 3 Feb), feel-good road movie The Peanut Butter Falcon (Mon 10 Feb), Liam Neeson’s Ordinary Love (Mon 17 Feb) and Russian Cannes favourite Beanpole (Mon 24 Feb).
________________________
Whether or not it feels like spring, we hope you agree there’s enough in our programme this February to put a spring your step!
Tickets are available with free booking online or, alternatively, by calling our Box Office on (01) 231 2929. You can also keep up with us on Facebook, Twitter and Instagram.