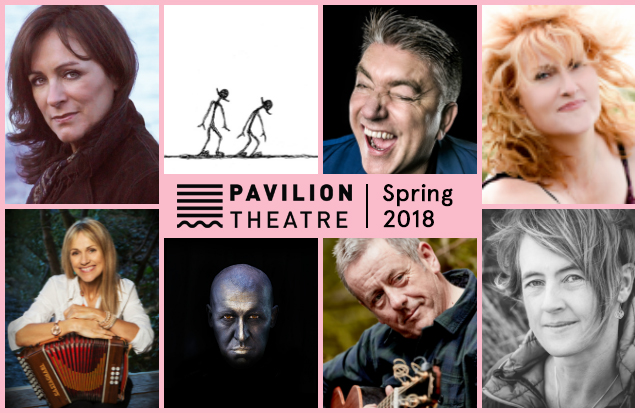 We couldn’t be happier to announce the launch of Pavilion Theatre’s Spring 2018 Season - a dazzling array of theatre, music, comedy, family shows, cinema and much, much more!
Tickets for all events are on sale now, including our Monday Night Season Ticket, Pat Kinevane Trilogy Tickets and Music Network Season Tickets.
Without any further ado, let’s take a look at a few of the over 80(!) events coming up this season…
____________________

Multi award-winning Galway theatre company Druid presents their acclaimed new production of Waiting for Godot by Samuel Beckett (Tue 3 & Wed 4 Apr). Regarded as one of the most significant plays of the twentieth century, the Irish Times has deemed this “the freshest, funniest and most affecting production […] in at least a quarter of a century".
Widely celebrated in London and New York for its powerful story inspired by the abduction of Brian Keenan, Someone Who’ll Watch Over Me by Frank McGuinness (Thu 1 – Sat 3 Mar) returns home to Ireland this spring in a stunning revival from Decadent Theatre Company starring Diarmuid de Faoite.
A firm favourite with Pavilion audiences, Fishamble: The New Play Company presents Olivier Award winner Pat Kinevane performing all three plays in his celebrated “trilogy”: Forgotten (Thu 18 Jan), Silent (Sat 17 Feb) and Underneath (Thu 17 May). Tickets for all three of these captivating one-man performances are just €55.
Pan Pan Theatre has been pushing boundaries in Irish theatre for nearly a quarter-century, and its latest production The Importance of Nothing (Wed 25 Apr) is no exception. On the surface, it’s a comedy about a drama therapy class in an imaginary prison, but the references and parallels with the work of Oscar Wilde make this a vital commentary on one of our most celebrated writers.
Following the success of My Aunt Bee and Padriag Potts’ Guide to Walking, Seamus O’Rourke returns to Pavilion Theatre with From Under the Bed (Thu 22 Feb). This sharply observed tale of two brothers (O’Rourke and Arthur Riordan) in the rural Ireland of 1979 is sure to ring true with audiences.
From “unparalleled Beckett champions” Gare St Lazare Ireland (New York Times) comes Here All Night: The Sound of Beckett (Fri 27 & Sat 28 Apr), an entirely original performance that defies easy description. This celebration of music in Samuel Beckett’s work is an entrancing experience incorporating an original score by UK composer Paul Clark, and improvised fiddle by Caoimhín Ó Raghallaigh.

Following the massive success of their second album Ephemera and its live tour, national treasure Little Green Cars (Fri 19 & Sat 20 Jan) play two intimate acoustic shows at Pavilion Theatre before they return to the studio.
Italian composer and pianist Federico Albanese (Fri 6 Apr) returns to Dún Laoghaire this season with special guest Chequerboard for an evening of sweeping, cinematic music that transcends genre.
We’re thrilled to have the supremely talented Scottish singer-songwriter Karine Polwart, creator of 2017 Dublin Theatre festival hit Wind Resistance, back on our stage as part of the Karine Polwart Trio (Thu 5 Apr). This concert of Karine’s hauntingly beautiful folk music is guaranteed to be unforgettable.
Treat yourself to a whole season of captivating concerts with a Music Network Season Ticket! For just €60 you’ll get to experience all four performances: Trad giants Niamh Parsons, Ciarán Tourish, Liam Kelly & John Doyle (Wed 17 Jan), Russian piano virtuosa Anna Tsybuleva (Tue 6 Mar), young masters Thibaut Garcia & Isang Enders (Tue 1 May) and gifted song interpreters Heidi Talkbot, Breanndán Ó Beaglaoich, John McCusker & Paul Meehan (Sat 19 May).
With a catalogue of brilliant material spanning two decades, singer-songwriter Jack Lukeman (Fri 12 Jan), also known as Jack L is sure to delight loyal fans and newcomers alike with this intimate concert.
Eddi Reader (Fri 16 Feb) rose to fame in the 1980s with the group Fairground Attraction and their No. 1 hit Perfect but with nine critically-acclaimed solo albums under her belt (and an as-yet-untitled 10th on the horizon) the Scottish songstress is showing no signs of slowing down. Just a few tickets remain for this very special concert, so speedy booking is essential!
One of Ireland’s most celebrated singers covers one of Ireland’s most celebrated songwriters in Mary Black Sings Jimmy Mac (Fri 23 Feb). This is Jimmy Mac Carthy as you’ve never heard his work before, as performed by multi-platinum selling artist and Pavilion favourite, Mary Black.
The towering talent of Luka Bloom (Fri 9 Mar) needs no introduction. Having produced over 20 studio albums since the 1970s, Luka’s mastery of the guitar and singular ability to interpret well-known songs in new and inspiring ways has won him acclaim in Ireland and abroad.

This year Mountains to Sea dlr Book Festival (Wed 21 – Sun 25 Mar) has a very exciting line-up to satisfy bookworms, free-thinkers and curious minds of all stripes. Check out the full programme and book tickets here.
Learn everything you ever wanted to know about Gene Kelly from the woman who knew him best: his wife and biographer, Patricia Kelly. Featuring an extraordinary range of never-before-seen clips, audio recordings, personal effects and anecdotes Gene Kelly: The Legacy (Tue 27 & Wed 28 Mar) is essential for anyone who appreciates classic cinema.

Back by phenomenal demand, David O’Doherty: Big Time (Sun 14 Jan) is making another stop in Dún Laoghaire after two sold-out shows in October. As seen on 8 Out of 10 Cats Does Countdown, the DOD is a bona-fide Irish comedy phenomenon.
PJ Gallagher & Friends (Sun 4 Mar) is a star-studded standup gala with all proceeds going to the RNLI (Irish Lifeboats). With performances by PJ himself, Deirdre O’Kane, Eric Lalor, Joanne McNally and more.
In his new show The Man with Three Brains, Jason Byrne (Thu 15 Feb) reveals the neurological recipe that allows him to cook up quickfire quips: his left brain, right brain and centre brain. Laugh along with the “king of live comedy” (The Times) as explains just how he does it.
The Nualas (Sat 31 Mar) are back in the ring for a glittering bout of knock-out, body-slamming comedy gold. Don’t miss Glam Slam!, their all-singing, all-joking new show.
A household name for his work on stage and screen, Pat Shortt (Sat 7 Apr) returns to the standup circuit with How’s Tings? It’s about big tings, little tings, important tings, personal tings and all sorts of other tings too.

Renowned company Monkeyshine presents The Magic Bookshop (Sat 10 Mar), set in a treasure trove of wonders where old books flock together and their stories hop from the pages! Audiences are encouraged to bring a gently used book to swap at this literary celebration.
Penguins (Fri 30 Mar) is a unique and engaging show for children about friendship, fun, identity and the ever-changing meaning of family from Cahoots NI, set in the unusual surroundings of New York’s Central Park Zoo…
Kilkenny-based Barnstorm Theatre Company has been creating acclaimed family shows for nearly 30 years, and they’re bringing their latest – Star Chasers (Sun 29 & Mon 30 Apr) – to Pavilion. It’s a tapestry of music, movement and magical imagery exploring themes of loss and resilience.

Pavilion Theatre proudly presents a brand new season of Monday Night Cinema, including plenty of hotly-tipped Oscars contenders, foreign-language gems and two Irish premieres as part of Audi Dublin International Film Festival. Make sure to get your Season Ticket – 16 weeks of acclaimed cinema for just €80.
Following on from the huge success of our first series of Royal Opera House screenings, we have a further four spectacular London productions planned for Spring 2018. Captured in exquisite HD picture and sound, audiences feel as if they’re right there in the auditorium. Book your tickets for Verdi’s Rigoletto (Wed 31 Jan), Puccini’s Tosca (Fri 9 Feb), Bizet’s Carmen (Sat 10 Mar) and Verdi’s Macbeth (Fri 13 April) now.
Shakespeareans rejoice! Not one, but two of the Bard’s greatest masterpieces are coming to our big screen as part of National Theatre Live’s Encore Series: Hamlet (Tue 20 Feb), starring Benedict Cumberbatch, and Macbeth (Thu 10 May). With the former pre-recorded and the latter broadcast live via satellite from Shakespeare’s home of London, this is simply the best way to see these timeless plays.
For those who love a night at the ballet just as much as a night at the opera, we’re delighted to be screening two incredible ballets from The Royal Ballet in London. First, Shakespeare’s stunning The Winter’s Tale (Wed 28 Feb) – broadcast live via satellite – then the pre-recorded Bernstein Centenary (Thu 12 Apr) a celebration of one of the 20th Century’s most celebrated composers.
You’ve delved into the life and work of Matisse and Van Gogh at Pavilion, and with our latest Exhibition on Screen series you’ll get the chance to learn about Claude Monet (Tue 30 Jan), David Hockney (Tue 13 Feb) and Canaletto (Wed 11 Apr) through high-definition gallery footage, recreation and documentary.
There’s also a fantastic selection of special screenings for the whole family, including BBC nature documentary Earth: One Amazing Day (Sun 14 Jan), Paddington (Sat 20 Jan), Buster Keaton’s Sherlock Jr. (Sun 25 Feb), the classic The Princess Bride (Sat 31 Mar) and more.
____________________
Well, there you have it – just a taste of what’s coming up at Pavilion Theatre this spring!
We advise early booking for everything, and you could even get 20% off selected events through our Early Bird program.
Let us know what you’re most looking forward to on Facebook and Twitter. You can avail of free booking online through our website, pick up the phone on (01) 231 2929 or just drop into us.