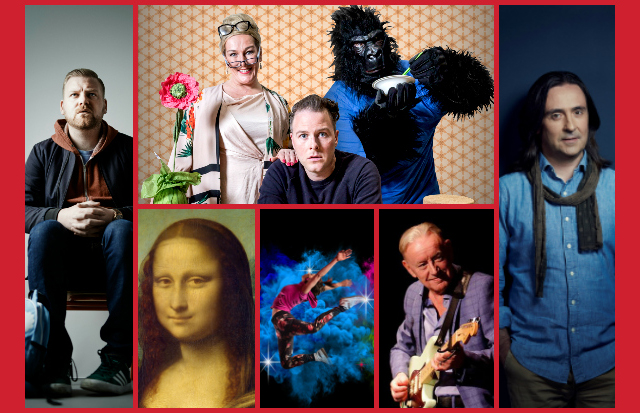 Temperatures may be dropping, but we’ve got a toasty line-up of amazing events to keep you warm as winter blows in!
Let’s take a closer look at what’s in store…
____________

Based on the incredible true story of comedian PJ Gallagher’s childhood, Madhouse (Tue 19 & Wed 20 Nov) is a hugely entertaining play written by PJ himself with Una McKevitt. Growing up, PJ’s mother provided full-time care for six men with schizophrenia… making his house a little more unusual than most!
Following sold-out runs at the Abbey Theatre and Edinburgh Fringe, CLASS (Thu 21 – Sat 23 Nov) by Iseult Golden and David Horan comes to Dún Laoghaire as part of a national tour. Set during a tumultuous parent-teacher meeting, this warm, funny play explores issues of social status, education and love.
Nuala McKeever’s In the Window (Fri 29 Nov) has been performed to great acclaim around the world, from the US to India. Packed with laughs, this comedy play follows a disillusioned woman named Margaret who plans to end her unfulfilling life before some unexpected visitors spoil her plans.

From the team behind BAKE! comes an all-new family adventure about a young archaeologist who makes an amazing discovery: The Dig (Sun 3 Nov). It’s the perfect show to end the midterm break with for ages six and up.
The Wolf and Peter was an international sensation and now CoisCéim Dance Theatre are back with Francis Footwork (Fri 8 & Sat 9 Nov), a magical, empowering new tale that encourages everyone to dance their own dance.
Barnstorm Theatre explore the nature of friendship and what it takes to get along in The Bockety World of Henry & Bucket (Sun 17 & Mon 18 Nov). This often hilarious play for ages 4 and older has a great message and enough slapstick comedy to call Laurel and Hardy to mind!
We’re screening Missing Link (Sun 24 Nov), the latest stop-motion masterpiece from the people who brought you Coraline, ParaNorman and Kubo & the Two Strings. It’s a globetrotting family adventure featuring the voice talents of Zack Galifianakis, Hugh Jackman and Emma Thompson.

History buffs can look forward to a fascinating live talk by BBC historian Neil Oliver (Tue 5 Nov) titled The Story of These Islands in 100 Places. The Coast presenter will be discussing episodes from the history of both Britain and Ireland in his characteristically engaging style.

Blues legend Don Baker (Tue 26 Nov) is back on the road and his Winter Tour is swinging by Dún Laoghaire. Expect world-class guitar and harmonica as he performs songs from across his 17-album catalogue.
With all three members having toured as the lead singers of The Hollies, 10cc and The Sweet, FRONTM3N (Wed 27 Nov) is a must-see celebration of this unforgettable era for British pop music. You can expect to hear hits like He Ain’t Heavy, Rubber Bullets, Ballroom Blitz and many more!

Gwendoline Christie (Game of Thrones) leads an all-star cast in our Encore screening of the new National Theatre production of Shakespeare’s most famous romantic comedy, A Midsummer Night’s Dream (Sun 3 Nov).
Arriving 500 years after his death, Leonardo: The Works (Thu 7 Nov) takes a fresh look at the Renaissance master and showcases his paintings in stunning high definition. This Exhibition on Screen documentary is essential viewing for any art lover.
We have not one, but two spectacular Royal Opera House screenings to look forward to in November: Mozart’s masterpiece of sexual intrigue and vengeance, Don Giovanni (Fri 8 Nov) and Donizetti’s Don Pasquale (Sun 24 Nov), a comedy of domestic drama across two generations.
James Corden’s Tony-winning 2011 performance in One Man, Two Guvnors (Sat 30 Nov) is credited with skyrocketing the Londoner to international superstardom – and with good reason. Experience the hilarity of this comedic tour-de-force yourself with our National Theatre Live: Encore screening.

To celebrate the 25th anniversary of Jane Campion’s Oscar-winning romantic masterpiece The Piano (Sun 17 Nov) the fully restored film will be making a welcome return to our big screen. Holly Hunter and Sam Neil deliver career-best performances in this tale of rebellion in Victorian-era New Zealand.
Thanks to a trove of newly discovered footage and thousands of man hours painstakingly syncing audio, audiences can finally experience the 1969 mission to the moon for themselves with Apollo 11 (Thu 28 Nov). See this staggering documentary before it scoops the Oscar it’s hotly tipped to win in February!
Finally, our Autumn/Winter season of Monday Night Cinema continues with four fantastic films: Irish director John Butler’s odd-couple comedy Papi Chulo (Mon 4 Nov), art epic Never Look Away (Mon 11 Nov), Bill Nighy family drama Sometimes Always Never (Mon 18 Nov) and Almodóvar’s quasi-autobiographical Pain & Glory (Mon 25 Nov).
____________
If that doesn’t warm the cockles of your heart, we don’t know what will! Tickets are available with free booking online or, alternatively, by calling our Box Office on (01) 231 2929. You can also keep up with us on Facebook, Twitter and Instagram.