Events to put a spring in your step this February! 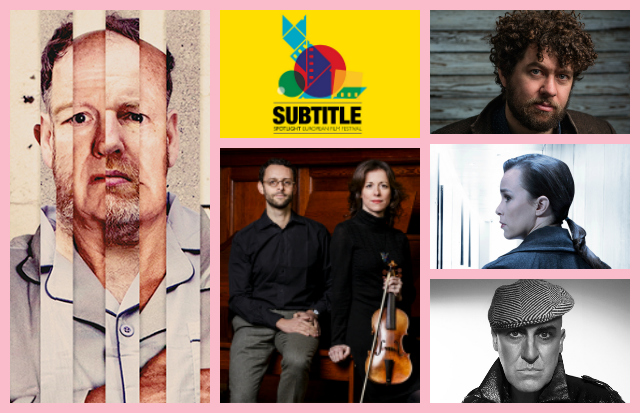 Set in 2029, Postcards from the Ledge (Tue 5 – Sat 9 Feb) finds Ross O’Carroll-Kelly grappling with the sale of his childhood home and the marriage of his daughter in Paul Howard’s typically hilarious style. Be advised that only matinée tickets remain for this hugely popular play!
Following its hit premiere at Pavilion Theatre as part of Dublin Theatre Festival and an acclaimed run in New York, Fishamble’s On Blueberry Hill by Sebastian Barry (Tue 12 – Sat 16 Feb) returns to its spiritual home. Niall Buggy and David Ganly reprise their roles as PJ and Christy, two prisoners with very different histories bound by circumstance.
Fishamble’s Before by Pat Kinevane (Thu 21 & Fri 22 Feb) is the long-anticipated new play from the writer and performer of Forgotten, Silent and Underneath. Thanks to an original score recorded by the RTÉ Concert Orchestra, music is an even more intrinsic element of Before than Kinevane’s previous work – with all the wit, heart and kinetic energy he is known for very much present and correct.

Music Network has a treat in store for lovers of all things Baroque as Irish violinist Claire Duff and French harpsichordist Benjamin Alard join forces for Inspiring Bach (Wed 20 Feb). Both players have a deep knowledge of JS Bach and rich backgrounds in the performance of early music, so expect to hear these pieces as 18th Century audiences would have!
One of Ireland’s finest singer-songwriters makes a welcome return to Dún Laoghaire this month. Declan O’Rourke (Sat 23 Feb), fresh from the re-release of his classic debut album Since Kyabram and a win for Best Original Song at the inaugural RTÉ Radio 1 Folk Awards, is sure to put on a characteristically great show.
Terry Lee Goffee has built a reputation among audiences across the US as well as the Cash family themselves as being the quintessential Johnny Cash tribute. Fans can look forward to The Man in Black (Sun 24 Feb) performing hits like Ring of Fire, Folsom Prison Blues and I Walk the Line in authentic Cash style.
Equal parts opera, dance and Baroque concert, Irish National Opera break new ground once again with Gluck’s Orfeo ed Euridice (Wed 27 & Thu 28 Feb). Tickets for this ambitious new production in association with United Fall and the Irish Baroque Orchestra are in short supply, so patrons are advised to book soon if they want to experience it for themselves.

Monday Night Cinema continues in earnest this February with five great films: Hungarian post-WWII drama 1945 (Mon 4 Feb, 5pm & 8pm), riotous French period comedy Return of the Hero (Mon 11 Feb, 5pm & 8pm), Turkish family epic The Wild Pear Tree (Mon 18 Feb, 4pm & 8pm), French rom-com Just to Be Sure (Mon 25 Feb, 5pm) and Australian sports dramedy The Merger (Mon 25 Feb, 8pm) as part of Virgin Media Dublin International Film Festival.
________________
That’s all, folks! If our stuffed-to-the-gills February lineup isn’t enough for you, be sure to check out Druid Theatre Company’s Furniture by Sonya Kelly (Wed 20 - Sat 23 Mar) which is sure to be one of the Irish theatre highlights of the year.
Tickets are available with free booking online or, alternatively, by calling our Box Office on (01) 231 2929. You can also keep up with us on Facebook, Twitter and Instagram.