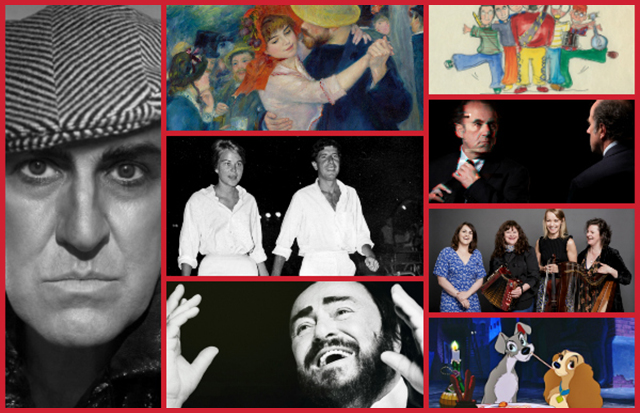 Autumn has arrived and we’re so excited to get back to bringing you the very best entertainment around.
With a huge selection of cinema spanning documentary, family, opera and much more as well as Dublin Theatre Festival, Culture Night, compelling concerts and the triumphant return of Pat Kinevane, you’re bound to find something you’ll love.
_____________________________

Pat Kinevane is no stranger to Pavilion Theatre, and after many years of sold-out performances we couldn’t be more excited to host all four of Pat’s solo plays for Fishamble: Forgotten (Wed 11 Sep), the Olivier Award-winning Silent (Thu 12 Sep), Underneath (Fri 13 Sep) and Before (Sat 14 Sep). Funny, heartbreaking and uplifting in equal measure, these performances really must be seen to be believed.
Also from Fishamble, The Alternative (Tue 24 – Sun 29 Sep) comes to Dún Laoghaire as part of Dublin Theatre Festival. Written by Michael Patrick and Oisín Kearney, this production is Fishamble’s chosen A Play for Ireland and asks the question, “what if Ireland was still part of the United Kingdom?”. Its all-star cast includes Karen Ardiff, Lorcan Cranitch, Maeve Fitzgerald, Fionntan Larney, Rory Nolan, Rachel O'Byrne and Arthur Riordan.

Four of Ireland’s leading traditional musicians share a stage thanks to Music Network: Tara Breen, Laoise Kelly, Josephine Marsh & Nell Ní Chróinín (Thu 19 Sep). This is an absolutely essential night’s entertainment for lovers of authentic Irish music.
Our line-up of free events for Culture Night (Fri 20 Sep) is a real treat for music fans, with a solo recital by Polish pianist and composer Hania Rani, an immersive audiovisual performance of Jóhann Jóhannsson’s Orphée by Dublin ensemble Glasshouse as well as a screening of Aretha Franklin concert documentary Amazing Grace. Complimentary tickets will be available to book from Fri 13 Sep.
After their hugely successful debut Pavilion Theatre performance last year, the Route 66 Big Band (Sat 21 Sep) returns to our stage for another evening of recognisable classics by the likes of Frank Sinatra, Ella Fitzgerald and Adele as played by a 16-piece band with singers!

Author of the hugely influential novel and inspiration for the TV hit The Handmaid’s Tale, Margaret Atwood (Tue 10 Sep) will be interviewed live in London about its long-awaited sequel The Testaments. We’re excited to be screening this event live via satellite, where patrons will also be able to purchase their own copy of The Testaments.
Seamus Heaney’s final masterpiece, his translation of Aeneid Book VI (Wed 18 Sep) by Virgil, will be read aloud by Stephen Rea with mesmerising musical accompaniment by cellist Neil Martin in this unique literary which stunned a sold-out audience as part of Mountains to Sea dlr Book Festival in March.

We're screening two Walt Disney animated classics across one weekend this month: Lady and the Tramp (Sat 7 Sep) and The Jungle Book (Sun 8 Sep). Both represent the golden age of this beloved studio, with an iconic canine romance and a jazzy adventure to look forward to. Make sure to avail of our great-value family tickets, at just €25 for a family of four.
Making a special trip to Dún Laoghaire from their home on Glasses Island, The Speks (Sun 15 Sep) will once again be putting an acoustic Irish spin on nursery rhymes and singalong songs to get young and old alike jumping in their seats! Tickets are selling fast though - so book soon to avoid dissapointment.

Ever wondered how the Impressionists became global art icons? Find out about collector Paul Durand-Ruel and how he championed the likes of Cézanne, Monet and Degas in our latest Exhbition on Screen documentary: The Impressionists and the Man Who Made Them (Thu 5 Sep).
Join the King of the Waltz, André Rieu (Sun 8 Sep), for our Encore Screening of his hometown Maastricht concert! Audiences can expect high-energy classical music as performed by André and his Johann Strauss Orchestra along with a host of special guests and delightful surprises.
Here’s a night at the opera with a difference! Performed on the spectacular lake stage on Lake Contance, Bregenz in Austria, Rigoletto on the Lake (Sun 22 Sep) is a bold new take on Verdi’s tale of sacrifice and revenge.

Harkening back to a time of free love and bohemian living, Marianne & Leonard: Words of Love (Fri 6 & Tue 17 Sep) documents the relationship that formed between musician Leonard Cohen and his Norwegian muse Marianne Ihlen on the Greek island of Hydra and inspired some of his most famous songs.
Gardeners rejoice, we’re screening the acclaimed new documentary about Dutch horticultural superstar Piet Oudolf, Five Seasons: The Gardens of Piet Oudolf (Sat 7 Sep). Learn about how the green-fingered genius behind the likes of New York’s High Line and Battery Park creates his landscapes.
Following their arrest for handling leaked police documents, we’re proud to welcome producer Trevor Birney and journalist Barry McCaffrey to Dún Laoghaire for a screening of Alex Gibney’s Emmy-nominated documentary No Stone Unturned (Sat 7 Sep), followed by a post-film discussion. The film details the 1994 Loughinisland massacre and questions whether the British authorities hampered efforts to bring those responsible to justice.
Mantra: Sounds into Silence (Sun 8 Sep) is a timely documentary about the global phenomenon of chanting, which is bringing together people from all walks of life and helping them find healing and inner peace. The film approaches mantras from a non-denominationally spiritual perspective, as well as a scientific one, with plenty of inspirational personal stories to follow.
Oscar-winning director Ron Howard has already brought The Beatles to life onscreen with Eight Days a Week, and now the world’s most famous tenor gets the same treatment in Pavarotti (Sun 15 & Tue 17 Sep). Featuring beautifully restored concert footage, newly discovered interviews and a comprehensive overview of the opera singer’s life, this is crucial viewing.
We'll also be back with a brand new season of Monday Night Cinema so don't forget to guarantee your seat at all 16(!) weeks of amazing cinema from September to December with a Season Ticket for just €104.
_____________________________
We hope you’ll join us for one of these fantastic events as our Autumn/Winter 2019 kicks off. Tickets are available with free booking online or, alternatively, by calling our Box Office on (01) 231 2929. You can also keep up with us on Facebook, Twitter and Instagram.